OK, so I’ve had my Dell Chromebook 11 for just over a week and am still exploring its capabilities but I think that it’s time to talk specifications.

The screen is a perfectly usable 11.6″ with a resolution of 1366 x 768 and there’s an HDMI out with 1080p hi-def resolution. I’ve not used it in bright sunlight but I never used my Toshiba outside either and inside, it’s as bright as it needs to be.

There’s a 1.4 GHz Intel U2955 dual core processor with a 2Mb cache, that’s a Celeron if you like names. Memory wise there’s 4Gb RAM to keep things moving along and a 16Gd solid state drive, SSD. from what I’ve read, it’s like a PC, the more RAM the better the performance and I’ve had 20 tabs open with no slowdown.

To keep things simple there’s no network port but Wi-Fi, 802.11 a/b/g/n so you’ll be able to get on-line wherever there’s a wi-fi network. Bluetooth 4.0 completes the networking so that you can connect to your portable speakers or headset and there’s a webcam, microphone and a decent pair of speakers which is great for Google Hangouts users – not looked to see whether it works with Skype yet.

There’s a headphone and microphone socket, SD card slot to expand the memory or read your camera pics and 2 x USB 3.0 ports.

The battery is rated at 51Whr which is good for between 7 and 9 hours depending on how you use it.

All in all, the specification is ideal for a lightweight, speedy, compact laptop that’s great when working away from the office.

Of course, after winning rave reviews and pretty much selling out the technology bandwagon rolls on and Dell are to going release a new Chromebook with an i3 processor but I’m not upset by that, this one is just fine. 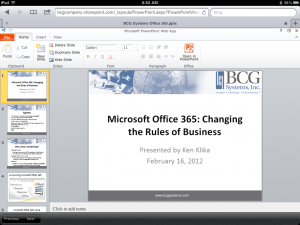 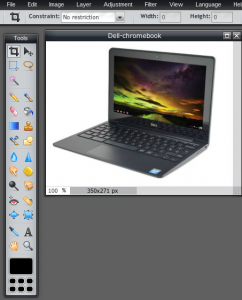 When preparing presentations, writing blog posts or editing websites I need to edit photographs and other images.

However, I don’t need to do the whole Photoshop thing, normally it’s a case of cropping, resizing, compressing and occasionally working with the colour balance, brightness or contrast to give some of the pictures a bit of a lift, and for that, a Chromebook is more than adequate.

It’s not unlike editing pictures on a tablet or phone, tools such as Pixlr Photo Editor and Pixlr Touch Up can deal with pretty much every basic image/photo editing requirement.

You can see a screen grab from Photo Editor on the right and it compares very favourably with my favourite Windows editor, the free www.getpaint.net, which offers simple photo editing on Windows computers.

if i need to be more creative or actually originate an image then I’ll do it my PC where I can choose from Photoshop, Paintshop Pro and the excellent, and free, Gnu Image Manipulation Program, AKA the GIMP. 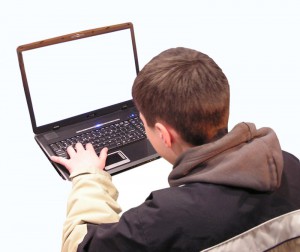 My trusty Toshiba laptop is coming up on 3 years old and is beginning to show its age. Like its owner, it’s heavy, getting slower with age and just looks too chunky.

I have been agonising over its replacement for a while. I was taken with Windows Ultrabooks, great performance, quality screen and fantastic battery life, up to 5 hours but less than engaged by their prices, from £700 up.

I’ve also been looking at the Chromebooks which are basically small laptops with 11.6″ screens, fantastic battery life and running Google’s Chrome operating system rather than Windows. I even wrote about Chromebooks in an earlier post.

Larger screen Chromebooks are now available in in all cases battery life is as long as 9 hours, so all day computing without a charger is a realistic aim and they are impervious to viruses and other forms of malware. 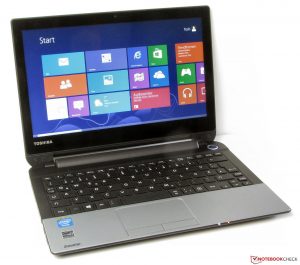 Screen quality is perfectly acceptable but build quality, according to reviews, has been variable. However, since Xmas 2013 more and more manufactures have been releasing models using Intel processors for better performance, compared to the Samsung processors used in older Chromebooks, and manufacturers such as Toshiba and HP have released Chromebooks with larger screens, a 13″ from Toshiba and a 14″ from HP

However, I have been wary of the leap away from Windows and that has held me back, particularly after discovering a Toshiba of a very similar size to the 12″ Chromebooks, with a touch screen and Windows 8 for not a lot more money than a Chromebook, around £300 compared to the typical Chromebook price of £200 to £250.

So, I continued to sit on the fence.

With excellent reviews and a keen price, my mind was 90% made up. Then I spotted a great deal on eBay just as the Dell delivery date slipped from days to months, my decision was made and on Tuesday July 8th I picked up my ever so slightly used Dell Chromebook. 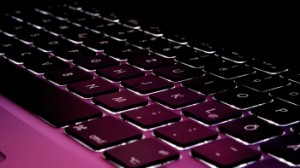 I don’t know about you, but I’m quite a fan of keyboard short-cuts, Ctrl-c, Ctrl-v and Ctrl-x are probably the most well known and most used making it easy to Copy, Paste and Cut text without lifting your fingers from the keyboard and that’s the reason why some people are fans, speed.

Keyboard shortcuts mean that your fingers never leave the keyboard, saving that transition to the mouse for the essential Copy & Paste commands. Of course, there are many more. Just Google “keyboard shortcuts” for complete lists of them.

However, I stumbled across the following 10 very recently and have found many of them immediately useful. Of course, an aging memory doesn’t really help. I still have to look at my cheat-sheet to remember some of them but I’m sure that they’ll be embedded in my memory soon.